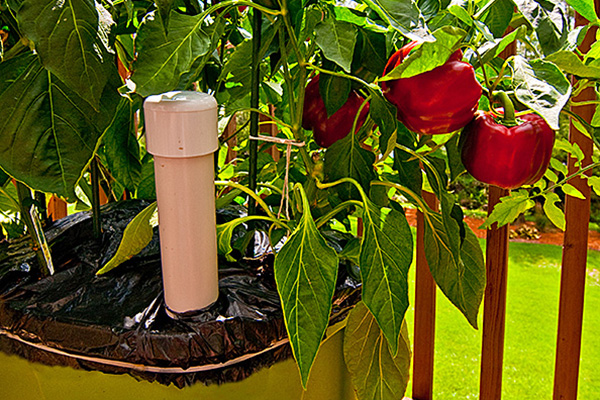 Ahh Gardening. We’ve been trying for years. It started years ago really. Johwey is an amazing cook and always in need of herbs. We were constantly buying basil, parsley, cilantro, thyme, and rosemary, and constantly using half-ish of the package and letting the rest rot away. Growing our own seemed like a cost effective and great-tasting hobby. We started small, with a few containers of basil, parsley, and rosemary I believe. It stayed alive for at least 2 weeks on our patio before dying a sad sad death. We didn’t have a clue. Over watered? Under watered? Hell if we knew. We kept trying, summer after summer.

Last summer, we had even higher hopes. We had two tomato plants, a watermelon plant, two basil plants, a parsley, and a cilantro. Things started off great. The basil was thriving, as was the parsley and cilantro. The tomatoes were ‘meh’ – as was the watermelon. One day at work, I get a panic call from J … “There are weird bugs on the basil!”, she shouts over the phone. Within 12 hours, our basil plants had been completely consumed by the satanic little Japanese beetles. Those bastards. The tomato plants failed miserably – producing a whole one tiny tomato. The parsley died, and the cilantro turned to wood. We still suck, but we’re getting a little better.

Still determined to grow my own stuff, and recently getting addicted to bell peppers, I spent the winter months researching geekier growing techniques. I was trying to find an affordable entry into hydroponic growing when I discovered a product called the EarthBox. This miraculous product couldn’t be overwatered or underwatered, it had a reservoir that used a sub irrigation system to wick moisture throughout the soil – the plants take as much water as they need, when they need it, which apparently produces very healthy plants and lots of fruits. I researched it, and sure enough, the reviews were raving. Hundreds of people produced amazing gardens with the EarthBox. I even found videos of farms using EarthBoxes, hundreds of them, to organically grow vegetables. One problem – a single EarthBox is $65. Certainly worth it, and a fantastic investment – but being a Fatwalleteer, I had to explore cheaper options.

I found a similar product, called the GrowBox. It was cheaper, but the reviews weren’t as good and had some complaints of mold and mosquitos. I’m not a fan of mold, or mosquitos, so I started looking into DIY options. I started on youtube and found some interesting looking options like the Global Bucket. The problem I had with that was the look, buckets are ugly. Additionally, one bucket = one plant. I figured I could get more plants with the same amount of dirt with another option. Enter the DIY Earthbox (That’s actually not the plans I used, but its darn close and I can no longer find the one I used.)

I built 3 boxes, similar to the ones in the plans. Each box is made from two 18-gallon bins, one water basket (or collander), one short piece of 1.5″ PVC pipe, one straw from a Disney princess challice (stole it from Rinoa). Total cost was about $30 bucks. Time drilling and dremeling, about 3 hours total. Each one holds about 3 cubic feet of potting mix which set me back another $50 bucks. 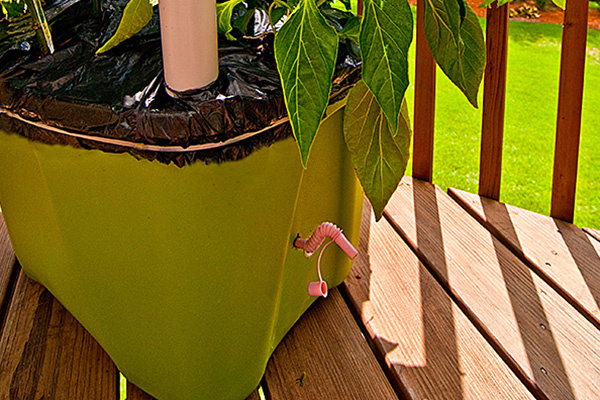 The great thing is, everything is self contained. The fertilizer is inside, and doesn’t pollute or run off. The top is covered with garbage bag material so there’s no weeding, no bugs, and no evaporation of the soil moisture. I fill each one up with water once per day. There’s no over-watering, as each box has a drain in the side. The soil is always moist, so the plants drink as much water as they need.

One box has six pepper plants, which so far have produced 16 absolutely delicious red peppers – and there are at least 20 more waiting to ripen. Another box has two Roma tomato plants, which have produced 8 beautifully vine ripened tomatoes (two of which were taken by the evil squirrels) – There are at least 30 more waiting to grow and ripen. The third box has a purple pepper plant and about 12 sugar snap peas.

The work involved in building was actually pretty easy. It was a little messy, but totally worth it. These things make gardening easy. All of the plants are thriving, and producing more veggies than I thought my black thumb was capable of.